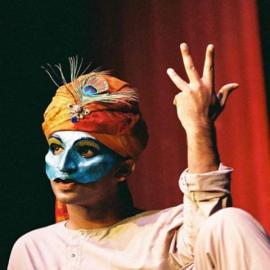 I left Guru of Chai completely blown away and utterly amazed at how one man effortlessly brought seventeen different characters to life while another creatively used sound to evoke our imagination and transport us to a different place.  This week I was thrilled to be back in the Rangatira at Q to experience another dose of Indian Ink theatrical magic.

Krishnan’s Dairy may be fifteen years old but it sure doesn’t feel like it.  The narrative is still as refreshing and contemporary as if it was written yesterday.  Weaving together copious amounts of comedy, two love stories and a touch of folklore, Krishnan’s Dairy is a heartwarming and endearing slice-of-life tale that is both entertaining and moving.

Gobi and Zina Krishnan are immigrants from India who have moved to New Zealand with their newborn child in the hopes for a better life and future.  They own a little corner store dairy and like a fly on the wall, we watch this couple as they go about their everyday business.

I thought Gobi and Zina were quite the comical pair; you can’t help but laugh at the charming shopkeeper and be amused at his wife’s antics.  I especially enjoyed Gobi’s interactions with the customers and Zina’s hilarious reenactment of a story involving Ganesh, the elephant deity.

Jacob Rajan’s masterful storytelling and superb showmanship along with David Ward’s exceptional guitar playing and accompanying sound effects draw you in to this immigrant family’s world immediately.  Once again Jacob plays many faces and this time he does so quite literally, seamlessly switching between characters through the swift changing of masks.  He does this so skilfully that the transition is smooth and not at all distracting.

What I found most impressive was how he convincingly pulled off conversations between Gobi and Zina.  The rapid back and forth mask-swapping, different voices and changes in body language were all executed so perfectly that it’s truly mind-boggling that there is actually only one actor on stage.

Unlike Guru of Chai, the set is minimal and sound genius David works his magic mostly hidden from sight.  A standout for me was the clever incorporation of mime into the story.  Jacob mimes perfectly in sync with David’s impeccably timed sound effects – it’s really quite impressive to see.

I also really liked the way in which the backstage was used as part of the set too – I thought it was a nice little nod to those old school stores that are run by families who usually lived either behind or above the store.  Using both light and shadow or even just simply moving from one end of the stage to the other, it created another theatrical element to the story.

Krishnan’s Dairy is a beautiful and brilliant masterpiece by the Indian Ink Theatre Company and considering it’s longevity, is already proving to be a timeless classic.  If you haven’t already seen it, put simply: you need to.

Tickets are going like hot cakes so make sure you get in quick!  The season at Q concludes on August 4th.  For more information and to book tickets, click HERE.

The Laughing Kiwi will be contributing reviews from Australia, specifically the Melbourne comedy circuit. He is a NZ born comedy fanatic, who has immersed himself in the NZ Comedy Festival annually since 2010, amassing views of hundreds of shows, and reviewing independently over eighty shows. In the latter half of 2013 he moved to Australia and here he plans to bring reviews of some of the biggest, and smallest, names in the local comedy scene.
Join 511 other followers