There’s just something about Hollywood in the 1940s that just oozes glamor.  Even though there was undeniably a dark side too, the 40s is still one of my favorite eras in American history.

If you are nodding in agreement, then you are going to absolutely adore Drowning in Veronica Lake, the fourth and latest production by Flaxworks.  A one (wo)man “tell all” show delivered as a monologue, Veronica Lake has come back to life to tell us about her steady rise to stardom which was then followed by her equally steady fall from grace.  She shares everything from the time she dined with the President to how she was sued by her own mother.  I thought the moments when she broke the Fourth Wall and addressed the audience directly was a great touch.

Alex Ellis portrays the sexy screen siren to perfection.  Her Old Hollywood drawl is true to the period and I felt she embodied the spirit of Veronica not just physically but emotionally as well.  While she is most definitely the star of the show, coming in at a very close second has got to be that stunning dress!  Sara Taylor and Elizabeth Whiting  really have to be commended for putting together such a gorgeous garment.

The dress plays a prominent role in the show, not just physically but metaphorically as well.  When you take your seat in the lovely-as-always Loft at Q, Veronica is already on the stage waiting and your eyes are immediately drawn to the dress which covers the entire stage.  As the narrative progresses and we start to see Veronica’s steady decline into drunken obscurity, we see the dress start to lose its shape and form too.  The symbolism of this is all the more powerful and effective due to the exceptionally paced narrative. 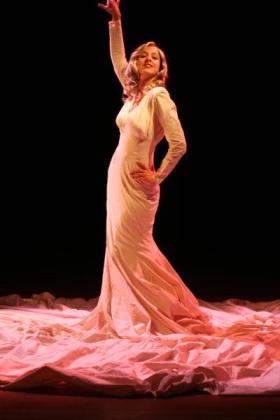 Criticized and stifled by her over-bearing mother before being treated the same way by the controlling Paramount Studios, we even see Veronica start to wrestle with the dress itself before eventually “drowning” in it.  I thought the dress being used as a metaphor of her being trapped in an industry where she struggled to be recognized for her talent and not just her “peek-a-boo bangs” was very clever.

Alex also momentarily goes off-character throughout the story to play other people in Veronica’s life, most notably her mother.  She does this seamlessly, switching between voices, accents, demeanor and even posture with lightning speed.  She performs essentially rooted in place for the entirety of the play but the well-timed use of light, sound and music to indicate a change in set and scene helped provide depth and “movement” to the show.

What makes this play extra special is the fact that it cannot really be considered a tribute to Veronica Lake, though it could easily be mistaken as one.  It does celebrate her legacy but the stories that are told are actually what was generated by the studio, the media and even Veronica herself during her time in the spotlight.  Many of these were suspicious and conflicting and we are reminded of this through the tongue-in-cheek nature of the script.

Drowning in Veronica Lake is dark, haunting, incredibly nostalgic and a must see, especially if you are a fan of the Golden Age of Hollywood.  The story of her life is both intriguing and tragic but sadly not unique.  This play provides a fascinating, “firsthand” insight into what happens on the other side of the fame and bright lights of Tinseltown.

Brilliantly written by Phil Ormsby and under the masterful direction of Simon Coleman, Drowning in Veronica Lake is playing at the fantastic Q Theatre until 1st September.  For more details and to book tickets, click here.  For a taste of Veronica, check out this video.