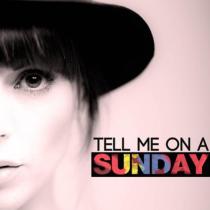 Tell Me On A Sunday will not be a hard sell for those already acquainted with Andrew Lloyd Webber’s work but I do feel this musical production is particularly accessible and one that can be easily enjoyed by all.  Directed by David Coddington, this one woman musical is performed by a cast of one and made up of a one-act song cycle which showcases music by Andrew Lloyd Webber and lyrics by Don Black.

We follow an ordinary English girl from Muswell Hill who journeys to the United States in search of love.  Her romantic aspirations starts off in the Big Apple, then to Hollywood and eventually back to Manhattan.  The story of her quest for love which turn out to be more of romantic misadventures is told entirely through song as a monologue but also in the form of letters to Mum.

Carly Binding, contemporary pop singer and songwriter, makes her musical debut and is perfectly cast as the “woman of the hour”.  She commands the attention of the audience effortlessly with not only her beautiful tone and stunning range but charismatic personality as well.

Her performance was simply mesmerizing; she is both an accomplished vocalist and gifted storyteller.  She moves from one song to the next with great ease and I thought she interpreted the songs remarkably; with honesty and heartfelt conviction.  My favorite performance of the night was Unexpected Song – the emotion she delivers in this song is incredible and sent chills up my spine.

The accompanying costume changes to signify the passing of time were executed well and added a dynamic layer to the performance.  Carly made full use of the set which is minimal but beautiful with everything on stage having a purpose.  Mention must also be made on the excellent lighting design which set the mood and ambiance perfectly.

Overall this is an outstanding, top notch production which ticked all the boxes for me and left me wanting more.  If you enjoy musical theatre, this one’s for you.

The Whimsical Banana rates Tell Me On A Sunday: 5/5 bananas

Tell Me On A Sunday is presented by The Real Theatre Company and is playing at the Loft at Q until 24 November.  To buy tickets and to get a taste of the music, click here.

This review is also featured on the Q website.