I always look forward to attending a Silo Theatre production because I know I can expect a slick performance and an excellent night of theatre.  I was particularly excited for BREL as I have only thus far seen plays by Silo and so was really keen to see how they would pull off this extraordinary collaboration of concert and cabaret.

You may not know who Jacques Brel is – as did I – but you will find you have come across his music.  In my opinion, this is the true mark of a great artist.  He wrote over 300 songs in his lifetime and his legacy still lives on to today – many of these have been translated and performed by big names in the business such as David Bowie, Ray Charles, Frank Sinatra, Leonard Cohen and Nina Simone, to name a few.  He is the third best-selling Belgian recording artist of all time and is known as one of the pioneering chansons in musical history.

Jacques Brel is a singer-songwriter in its truest form.  His songs provide a window into his soul and his perspective on life, love and the human condition.  His writing style is often described as dark, cynical, witty, passionate and revolutionary which spring from his reaction and experiences growing up at the time of the German invasion of Belgium during the Second World War. 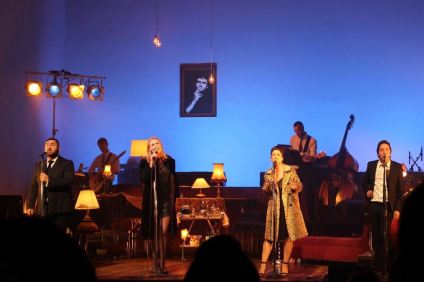 Thank you to Jackson Perry for the photo!

BREL, put simply, is absolutely breathtakingly phenomenal.  Described as “cabaret noir”, it is a staggering homage and wonderful celebration of Jacques Brel’s works – twenty-one carefully selected songs performed by some exceptional vocal talent.  Tama Waipara, Jon Toogood and Julia Deans are all household names in the New Zealand music scene and need no introduction.  Rounding up the quartet is seasoned theatre veteran Jennifer Ward-Lealand, touted the “First Lady of Cabaret” who is also one of Silo’s trust board members.

The set up of the performance space is incredibly gorgeous with its many vintage lamps peppered all over the stage; this intimate atmosphere is heavily nostalgic of the smoky, dimly lit underground jazz bars commonly found in New York and Berlin.  This set the mood and tone of the show immediately and increased my excitement considerably.

From the moment the quartet took to the stage and the four-piece band kicked in, you are completely transported into the profound and fascinating world of Brel.  His music is considered one of the major influences in contemporary music today and I can see why – his songs are timeless anthems that speak of both the joy and pain that is inevitable in life and love.  The songs are a perfect marriage of stunning melodies and absolute poetic gold – heartfelt, poignant and gut-wrenching.

Every song is performed to perfection with lots of heart and personality, a hint of cheek, and bucket loads of attitude and flair.  Each performance transitions seamlessly and effortlessly to the next and with each song, you are left wanting more.

I thought all four performers emoted and interpreted the songs brilliantly; they had great intuitive musical timing and consistently delivered the story behind each song compellingly and with conviction.  From haunting ballads to energetic anthems, performed both in English and fluently in French, the song list is an eclectic mix to suit any musical taste bud.

Equally as flawless are “Balkan music titans” Dr. Colossus, the extremely talented men behind the music.  Under the skilled direction of Leon Radojkovic, the band come together smoothly as one voice, either to help instill a sense of drama, build up the narrative of a song or simply to complement the vocal performance.  Throw in the well-timed, effective use of lighting too and what you get is sublime and decadent music magic.

BREL is a cabaret and theatrical masterpiece and an absolute triumph.  Michael Hurst’s accomplished direction has succeeded in creating a mesmerizing and unforgettable musical tribute to one of the greatest artists in the twentieth century.  This is not only a vocal spectacle and musical journey you must experience but one that you NEED to.

BREL is at the magnificent Concert Chamber in the Town Hall until 24 November.  For more information and to buy tickets, click here. 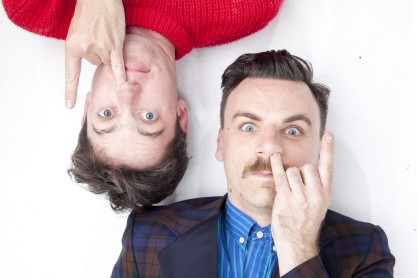 It was my first foray in to attending and reviewing a kid’s show but I was excited and really keen to see this award-winning smash hit duo from across the ditch in action.  Described as “deliberately raucous, rude and very, very funny”, it already indicates that it is not a kid-exclusive show but one that can be easily enjoyed by adults as well.

Meet Rich and Matt.  Rich is the serious and responsible one while Matt is mischievous, playful and likes dreaming of LOLCats.  They have created a show all about “compooters” which was meant to be performed inside a brand new computer but Matt broke it when he put cheese inside the DVD drive because he thought the mouse was hungry.  This is the brand of humor that you can expect to be dished out along with accompanying colorful props, a host of pop culture references and gags aplenty in this manic and hysterical show.

The stage, which houses a giant computer monitor, USB drive (“Uninteresting Stuff & Bits”) and a strategically placed recycle bin, is the duo’s playground for comedic lists as well as fun adventures.  Letting your imagination run wild is a necessity and audience interaction and participation is an integral part of the show.  It truly was a delight to see the kids just jump right in, eager to be involved.

Highlights of the show for me: an onstage game of Pong (the world’s oldest computer game, and smell) followed by a more modern 3D version which involved the entire audience.  I also really liked the concept behind the castle quest World of Woolcraft (which is “like World of Warcraft but with more ram”) where the audience are instrumental in how the adventure plays out with regular “decision time” sections.  There is even an elaborate fight scene “rated S for Stupid” featuring stunt doubles.

What impressed me the most is how effortlessly Rich and Matt had the kids eating out of the palm of their hands for the entirety of the show.  They knew exactly which buttons to push to get the best reactions from the kids.  The show is incredibly boisterous, beyond entertaining and will hopefully make you ROFLSHABOWLO (Roll On The Floor Laughing So Hard A Little Bit Of Wee Comes Out).

It is the duo’s first time ever to our shores but I certainly hope it won’t be their last!  I would pick these veterans at children’s theatre any day over the likes of The Wiggles and Barney.  The Listies Do Compooters is perfect for children and adults alike, or as they like to call it, “kidults” (kids and their adults).  This is a good starting point for kids who have not experienced the theatre before and great for adults who want to embrace their inner child for an hour.

The Listies Do Compooters is presented by TIME OUT Theatre and part of the October School Holidays Program.  Tickets are only $15 and their last show is on the 9th October – this is a fantastic show for the whole family so you don’t want to miss out!  For more information and to buy tickets, click here.

To find out more about The Listies, check out their website.

With a suggestive show title like that, The Outfit Theatre Company have left themselves nowhere to hide.  There really isn’t any ambiguity behind what the show is about and I was expecting nothing less than one hell of a raunchy show that was both confronting and entertaining.

With brief flashes of full-frontal nudity, plenty of simulated sex, weird fetishes and a few hand jobs thrown in for good measure, this show is definitely not for the conservative!  It tackles possibly the most taboo subject in society but thanks to the excellent direction, some fine writing by dramaturg Gary Henderson and polished performances by the cast, the show is actually not uncomfortable to watch with plenty of great one-liners, comedic moments and interesting insights about the sexual appetites of this country.

The set is minimalistic with just boxes that light up but they are seamlessly and strategically moved around with each scene change to create different spaces.  Coupled with the gorgeous chandeliers and appropriate mood lighting, the stage is visually scintillating which helps complement the actors’ performance and bring the story to life.

Unfortunately what dampened the experience for me was the sound issues which is largely due to the poor acoustics of the auditorium.  While the size of the stage and performance space is an ideal fit with the story, I do think the Concert Chamber is probably not the most appropriate venue for this production.  There is a lot of movement to and from the stage which is distracting at the best of times but unfortunately was made all the worse with the hardwood floors.  My attention kept getting diverted every time the female actors strutted up and down in their heels.

Furthermore unless you are sitting at the sidelines, the stage is a bit of a distance from the audience so in the scenes where music was present, some of the dialogue does get drowned out.  I also think the structure of the story should have catered for an interval; ironically it was more uncomfortable sitting down for almost two straight hours than it was watching couples getting it on!

These are of course things that can easily be rectified and I hope if future seasons are planned, that an alternative venue definitely be considered.  The production itself is absolutely top notch with great levels of authenticity and honesty to both the story and the performance.  Putting up something like this that pushes the boundaries is definitely an audacious move, and flaws aside, I do think they have done a remarkable job.  It takes a great deal of bravery to tackle such a controversial topic and even moreso for the actors to engage in such an intimate act on stage for all to see so I have the utmost respect for everyone involved.

The Sex Show is sexy, seductive and incredibly risqué but a whole lot of fun!  It’s definitely not for everyone, but if you have a great sense of humor and like your theatre on the naughty side, this is the show for you.

The Sex Show is presented in association with STAMP and is playing at the Town Hall’s Concert Chamber until the 13th October.  For more information and to buy tickets, click here.