What a fabulous four weeks of short and sweet performances it has been but as the saying goes, all good things must come to an end!

The quality of this year’s theatre entries really was very excellent; voting for just the one favorite was nearly an impossible task and I definitely did not envy the judges’ position – it was certainly a close race, in my opinion.  I was extremely pleased with the acts that made it to the Song and Theatre Final as they were all works I thoroughly enjoyed.

A few highlights for me: Dial One’s Annie & Joshua was just as delightful to watch the second time round; I found their encore performance more amusing especially their animated expressions and gestures – it really does celebrate the musical genre in all its glory.  Similarly it was enjoyable watching Dan Borengasser’s The Third Person again; the addition of the fog machine was a brilliant move as it added another comedic layer to the story.

Reading Lamouche by Finnius F. Teppett had an entertaining narrative, was well directed and featured a great cast so no surprises this act made it to the Finals – I liked the subtle yet effective changes that had been incorporated.  Pete Malicki’s V.D. came out on top, sweeping the most awards at the end of the night and it is completely deserved, I say – it is a superbly written piece, performed exceptionally by Jess Holly Bates who is such a skilled performer.

I was quite confident that The Oryza Foundation for Asian Performing Arts’ The Adventure of Kazu & Kengo would be in the Finals just on the audience applause alone.  The two ninjas are extremely likeable characters and I think their hilarious and farcical antics would attract a fanbase – there is definitely potential for further development, in my opinion.

And that’s a wrap!  It has been an absolute ride and I’ve had a ball of a time – thank you to Alex Ellis for organizing the tickets and thank you to all the talented people on the stage and behind the scenes for a wonderful month of bite-sized theatre.

Congratulations to all the acts that made it to the Finals and congrats also to those who left as award winners! (winners listed on the Short+Sweet Facebook page)

For all my Short+Sweet reviews from the entire season click here. 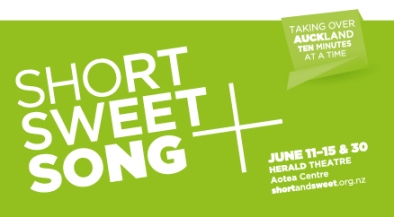 The second category of quickfire theatre kicked off last night and it’s one I have personally been looking forward to being a bit of a musical geek!  The bill is not as plentiful as what was presented to us during Short+Sweet Dance but it was still an enjoyable lineup all the same.  Here’s what I thought:

Annie & Joshua 5/5
A punchy rom-com set in a hotel lobby where a humble bellboy and the hotel’s receptionist allow their imaginations to sweep them away on a whirlwind romance of over-the-top proportions.  This “music-omedy” is the most faithful to the musical genre out of all the acts with archetypal expressive musical numbers, exaggerated gestures and melodic dialogue, all delivered brilliantly by the two performers who are adept vocalists.  A superbly written, wonderfully amusing and incredibly enjoyable piece – a great start to the evening!

What Love Can Be 3/5
This sombre and emotive piece goes behind closed doors and looks at what really goes on between an outwardly happy couple in a long-term relationship. Emma wrestles between wanting to please her disapproving, passive aggressive boyfriend and yearning to break free of his controlling grip – she expresses this struggle effectively through two vulnerable vocal performances.  Where I think this piece could improve on is the dialogue to song ratio; I felt the dialogue needn’t be as lengthy as the emotional impact rests in the heartfelt lyrics of the songs.

quiet desperation 4/5
Described as the “hysteria of endurance”, this group performance stretches and challenges the genre in this quirky and unique “musical” without words…or song for that matter.  Using various fitness apparatus like a treadmill, punching bag and even your basic skipping rope, this quintet combine sound effects with a host of creative vocals to create an orchestra of sound and rhythm that does somehow come together as one seamless melody.  A cleverly choreographed piece with great pacing and a dynamic “score”.

The Adventures of Kazu & Kengo (a.k.a. This is how Ninjas say hi…!) 5/5
This action-packed comedic piece follows two ninja wannabes and their quest to graduate from ninja school (at last!).  The ninja superstar master puts the instantly likeable duo through their paces in a number of scenarios where they must figure out what they need to do to save the day.  This is all delivered through a delightful mesh of song, dance, props and a dash of good ol’ slapstick.  Riotous and highly energetic, this short story is bucket loads of fun and wildly entertaining and was a clear crowd favorite.

Hole in The Road 4/5
The final piece in the bill is a musical lament of the various holes in the road (both literally and metaphorically) that we face in life and consequently dealing with these shaky encounters.  A thoughtful and charming medley of well written songs performed excellently by the performers, one of which was the festival director himself!  There were some subtle jazzy undertones which I felt worked well with the narrative and I thought the vocals were spot on; lovely harmonies and delivered with just the right amount of personality but also restraint.

Overall, Short+Sweet Song really is short and sweet but packed full of snappy and entertaining stories told through song and music.  It’s a shame there is only one heat and I can only assume it is because there were limited submissions in this category.  Here’s hoping there will be more next year; to echo this category’s tagline: everything really is better with a soundtrack!

Short+Sweet Song will be at the Herald Theatre until June 15th.  Click here for tickets.