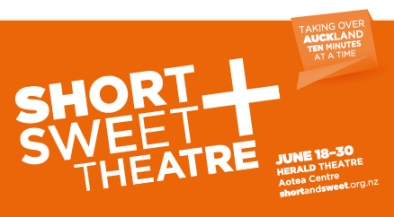 The final category for Short+Sweet Festival has kicked off and after an eclectic showcase of quickfire song and dance this past couple of weeks, it’s time for some bite-sized theatre.  Week 1 features a generous bill of eleven acts and get ready for quite the tasty theatrical spread as it is a fantastic line up!  Here’s what I thought:

The Birthday 4/5
A fast-paced whodunit story told without spoken word.  A glitzy party takes a turn when the birthday boy dies midway during the festivities – silent mayhem unfolds and everyone starts to point the finger of blame.  With no dialogue, this play relies on the actors’ non-verbal cues and the visual landscape to tell the story and although at times the action does get a little messy due to the large cast, it is an entertaining watch and definitely a great homage to the silent film genre.

Out From Under With Mary 4/5
This engaging two hander sees how an aversion to rain and alleged drug use bring a homeless woman and a suburban house wife together.  The two women are at odds initially but eventually they manage to form an unexpected camaraderie – the development of this unlikely bond and brilliant use of  multi-syllabic words along the way make for an interesting narrative.  A cleverly written and well cast piece that will leave you feeling a little warm and fuzzy inside.

Irish Stew 3/5
A low key slice of life tale which conveys how things that may get lost in translation can still somehow make sense between two soul mates.  Lauretta and Carlton are an absent-minded couple who go on a hunt for what starts off as an Irish shoe but subsequently keeps changing to different objects that sound similar.  This piece uses clever wordplay and is a charming look at a loving relationship that has blossomed over the years.

A Glorious Act 4/5
This retrospective doco transports us to 1933 and relates the horrific tragedy and brave sacrifice of 10-year-old Frances Mason, “New Zealand’s daughter brave”.  Told from the perspective of three witnesses and using visual aids, this “wondrous story” is incredibly moving and absolutely gut-wrenching.  This work packs an emotional punch which is an impressive effort considering the limited time frame.

The World’s Worst Fight 5/5
If you ever wondered what actually went down between Adam and Eve at earth’s creation, this is it.  This hilarious anti-rom com portrays the man and woman in clichéd gender roles – Adam is the “typical male” who is easily distracted and comfortable with how things are while Eve is the stereotypical nagging girlfriend who is critical of her man’s every move.  A cheeky take and contemporary spin on the world’s first couple, this piece is a bag of laughs.

Walking Shadow 4/5
A “tragic drama” set in a theatre, a scheduled table read goes wrong when the cast are late and Martin, an actor past his prime wanders in uninvited.  The young director and aging actor engage in a heated discussion of the then and now of the theatre – the more they disagree, the more aggravated Martin becomes; as the narrative unravels, the tension and suspense steadily increases.  This nail-biting play is superbly paced with credible performances by the two performers.

Staged Madness 5/5
A tongue-in-cheek piece about an actress who, in acknowledging the audience, causes us to wonder what is real and what is staged.  Kate Vox, a familiar face in the local theatre scene, plays herself and tries to convince her co-star that they are in a play while he tries to convince her that she is suffering from a breakdown.  A wildly entertaining work which breaks down the Fourth Wall in a refreshing new way while effectively weaving some witty meta-humor in to the “script”.

After. Life. 3/5
This dark play is centered around an alternate idea on where we go when we die – what if it isn’t heaven or hell but something else altogether?  The recently deceased titular character is faced with a constant “heads or tails” (quite literal) tug of war which he battles out with an unexplained enigmatic entity.  A fun and quirky view on the afterlife that will leave you ever so slightly disturbed and confused.

Reading Lamouche 5/5
Another table read setting where an impassioned director tries to spark some enthusiasm in his disinterested cast.  His attempts to persuade them that “art requires sacrifice” falls on deaf ears particularly when a humble backstage hand unwittingly becomes the star of the play.  A highly entertaining piece with great comedic value and an excellent cast – they were a clear crowd favorite.

Storming The Castle 5/5
An off-beat two hander featuring a wannabe-cool father and his estranged son who reluctantly seeks his dad’s advice on how to attract the girl of his dreams.  The narrative makes great use of pop culture references and the two performers are superbly cast, playing off each other effortlessly.  This comedy is irreverent, unorthodox and “a little bit wrong” but extremely well crafted and very enjoyable.

Overall, a thoroughly enjoyable evening and a stellar ensemble of plays – it was certainly a very difficult vote as I had many favorites!  Hopefully there will be additional acts sent to the Final as there are definitely more than two that are deserving to be there.  Looking forward to checking out what the Wildcard and Week 2 heats have to offer now!

Short+Sweet Theatre will be at the Herald Theatre until June 30th.  Click here for tickets.