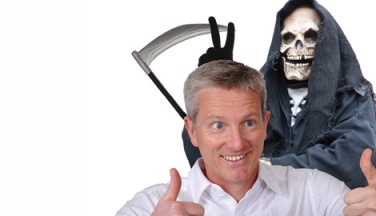 Terry Williams explains to us that this is his first solo show in a few years but it sure doesn’t feel like it.  He takes to the stage like a seasoned pro and very quickly establishes a great rapport with his audience.

The Grin Reaper came to be when Terry read a study of places on earth with the longest life expectancy.  He tells us that over the course of the show we will learn how to add ten quality years to our life.  I was very pleased to know that “wine at 5pm” was one of the ways!

Like most if not all homegrown comedians, his set is tailored more towards a Kiwi audience but that said his style of anecdotal comedy is one that has great universal appeal.  His show is made up of a collection of short stories  most of which end with some of the best punchlines I’ve heard.

Terry Williams’ The Grin Reaper is an entertaining hour of sharp and witty comedy that will have you laughing and, if you paid attention, living longer.  It’s easy to overlook the locals with all the many international comics currently in town, but if you do want to check out some of our homegrown comedic talent, you can’t go wrong with this one!