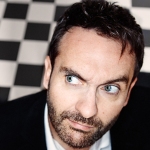 Reviewed by The Laughing Kiwi

I was lucky enough to be able to catch Southern during his week-long season headlining at The Comic’s Lounge in Melbourne where he not only showcased some of his best work but also took the opportunity to fine tune some new material for his upcoming new show, Your New Favourite Comedian.

Southern effectively followed on from material that had already been laid down by the preceding comedians in the lineup while effortlessly interacting with the crowd.  His act contained both current and local references, rather than solely relying on proven generic material.

Clearly a shining star in his field, this seasoned pro is unquestionably underrated in the Australian comedy scene.  Based on the reaction from the crowd tonight though, this should rightfully change.  Southern is “down under” until the middle of May, performing his shows of the last two years – A Brief History of History (2012), and The Kerfuffle* (2013) – before premiering his 2014 show in Adelaide for the Adelaide Fringe.

*Editor note: I saw The Kerfuffle at last year’s New Zealand International Comedy Festival and the Edinburgh Festival Fringe – check out my 5-star review of the latter performance here.

Southern is a comedian who never fails to deliver and has a great record of winning over even the coldest of comedy rooms with tales from his home in London and of his travels.  This overwhelmingly knowledgeable comedian expertly controls his environment to ensure each of his punchlines have maximum impact, all with the appearance of never even being slightly challenged.

Get in quick to get tickets to this star performer at every chance you can, he’s not one to be missed.

Gordon Southern will be premiering his new show Your New Favourite Comedian at the Adelaide Fringe from February 13th – March 1st.  For tickets, click here.