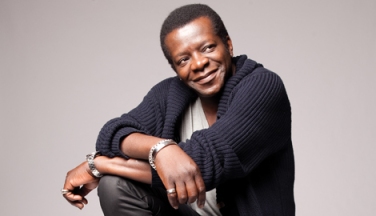 If you are in to stand up comedy, Stephen K Amos needs no introduction.  He is a household name in the comedic circuit and there is a reason for it – he is bloody good at what he does!

Stephen is back with a new show this year – The Spokesman – which comes from not only a passing comment that he would make a good spokesperson but more interestingly it also happens to be an anagram of his name.   He doesn’t make too much reference to this however; instead he focuses more on heroes and role models and this is a recurring theme which gets interspersed throughout the show amidst his usual style of sharing his observations and personal experiences.

Throughout the hour, we learn about the time he met the Queen, his fear of water and why he believes Jesus is a comedian – to name a few.  Most of the stories were actually ones he had shared in his previous show and though they were just as funny to hear again, I do wish we got to hear more new material!

He also spends a fair bit of time poking fun at our neighbors across the ditch which naturally sat very well with a Kiwi audience.  Comedians are generally really good at mimicking accents but I’ve always marveled at how particularly adept Stephen is at them, particularly the Australian accent.

Stephen’s greatest strength is his innate ability to establish a wonderful rapport with his audience which he uses to his full advantage and incorporates seamlessly into his set.  The show soon becomes much like an open forum with Stephen asking questions, conducting experiments and welcoming feedback from the crowd.  You don’t often find an audience at a comedy gig so willing to be “picked on” but in this show it felt like people were competing to be heard – at one point even audience members started heckling other audience members!

Stephen K Amos truly is a well seasoned veteran and an absolute master at his craft.  The Spokesman has the same “feel good” quality that is very signature Stephen K Amos and is off-the-cuff comedy at it’s very best.

Stephen K Amos is performing at the Rangatira at Q until Saturday May 4th.  For tickets, click here.  He will then perform just the ONE show at The Opera House in Wellington on May 5th – click here for tickets.