As I made my way to my front row seat in the beautiful Rangatira at Q (my second home this past week!), I was feeling both nervous and excited.  Nervous because sitting in the front row at a comedy show is never a good thing and excited because I genuinely could not wait to experience what all the great reviews have been going on and on about.  I had missed out on Chris Cox’s first visit to our shores back in 2010 and so did not really know what to expect.

First week of the Comedy Festival was a busy one for me; I was attending shows pretty much every night of the week!  All I can say is I am so relieved and chuffed that I managed to catch Chris Cox on his last show here in Auckland because, even though I still have a few more shows to see, I am already quite certain he is (going to be) my favorite of the festival this year!  Don’t get me wrong, everyone else I’ve seen so far have all been really excellent but I really enjoyed Chris’ show simply because it was just something completely different and not at all what you’d expect during a comedy festival.  He is not your typical stand up comedian but his show is just as entertaining (if not more) and will leave you not only bloody impressed but gagging for more.

So who is Chris Cox then and what is his show all about?  I guess you can call him a magician although he’s not the kind who pulls rabbits out of hats.  That being said there are rabbits on stage!  He insists he is a mind reader who cannot read minds, that everything is about coincidence, using psychology and observing body language.  My opinion?  He has to be a wizard (I vote former Hogwarts student!) because there was some pretty skillful mind reading going on on that stage!  The first and most obvious conclusion many will come up with to explain how he managed to do what he did is to say the show is rigged, but the ferret-in-the-sweater blows that theory well out of the water.  It’s been a few days now and my mind is STILL whirring.  It’s…like…magic!

Miraculously replicating drawings and magical laser lipsticks aside, I think the magic is really Chris himself.  His natural charm, “devilish good looks” and ability to just tell a good story will have you hanging on to his every word and move from the word go.  His show involves a lot of audience participation but the way he interacts with the crowd makes you feel just so comfortable – I can honestly say this was the first time I felt totally at ease being sat in the front row of a comedy gig.

It’s really one of those shows that you have to “see to believe” so all I will say is this: if Chris Cox is in your town, do yourself a favor and get a ticket – you will not regret it!  Wellington – he has 3 more shows at the Whitireia Performance Centre, so make sure you don’t miss out – get your tickets now (HERE) and prepare to have your mind fully blown…and read 😉  Your jaw WILL drop and by the end of the show you will leave absolutely flabbergasted.

Chris, thank you for the incredible experience – what an AMAZING and entertaining show, one I will not soon forget!  My only complaint is it should have been two hours long!  It was such an absolute pleasure meeting you after too 🙂  I hope you return next year, and this time I’ll happily sit in the front row wearing my I ❤ Cox badge with pride!  Hope you had a fantastic time back in New Zealand, even though you were ill! 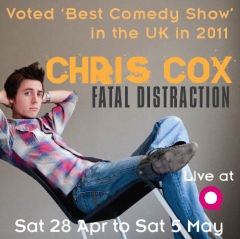 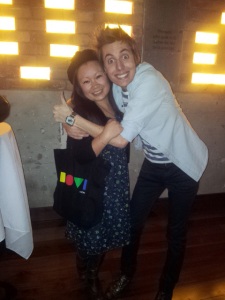 To get more Cox ( 😛 ) check out his website www.magiccox.com

P.S. – Shout out and big thank you to the teams at the Comedy Festival and Q Theatre – you all rock!