From the moment he so skillfully, without missing a beat and cool as a cucumber, put a heckler in his place at last year’s Comedy Gala, I was converted a Marcel Lucont fan.

Brought to life by the brilliant British comedian Alexis Dubus, Marcel Lucont is a self-proclaimed flâneur, raconteur and bon-viveur.  He brings a rare stand up comedy masterpiece that is uncommonly low-energy but full of sharp wit and dry humor centered around his cynical observations as a proud French misanthropist and expert international lover.  He is an excellent wordsmith and is flawless when it comes to telling a story – impeccably timed and perfectly paced, his egotistical and deadpan but yet alluring delivery will have you hanging on his every word and laughing in all the right (and sometimes wrong!) places.

In his new show, Gallic Symbol, you can expect more exquisite sex poetry (this time of a “breasty” nature), his usual haughty grievances about most things (especially anything British) and so much more.  His opening piece, “50 actual ways to leave your lover” sets the tone of the show perfectly.  Why wouldn’t you choose to catapult yourself in to a sea of naked women as a way to leave your significant other?  Perfectly normal and not over the top at all.  Apart from reading from his “manual of a sex addict”, he also shares hilarious excerpts from the diary of his teenage self.  If there’s anything funnier than Marcel Lucont, it is quite possibly a teenage Marcel Lucont.

My personal favorite bit was his hilarious parody of British humor; his impersonation of a stuffy British man is scarily accurate albeit incredibly stereotypical!  I also really enjoyed the amusing “sex positions 101”-esque class he delivers near the end, complete with corresponding visuals on cue cards.  And of course, the grand finale!  Marcel’s debut rap performance.  Yes, rap.  Prepare to be impressed.  All I can say is – merde oui!

I had the pleasure of meeting Monsieur Lucont after the show and he is an absolute delight!  I also got to see him in action again on the weekend co-hosting Le Comique, a cabaret-style event showcasing alternative comedy.  Suffice it to say, he was in top form then too and this time with a whole bottle of wine in tow!  Unfortunately his solo shows have finished its run in both Auckland and Wellington but you still have a chance to catch him as part of the Comedy Convoy, touring nationwide between 14-26 May (details HERE).

He really is one of those acts that words just cannot do him justice – you really need to be there to experience it yourself.  The show is highly sexual (but never vulgar, though sometimes teetering very near it!) and full of the sardonic musings of a self-righteous, narcissistic Frenchman, but if you can get past that, you will not be disappointed!  His performance is just effortless and will keep you captivated from beginning to end.  He is not overtly funny to the point you find yourself laughing yourself to tears (or maybe you might!) but his instinctive use of combining dry humor, sharp wit and a lot of clever wordplay, all delivered at the opportune time, will no doubt have you laughing and thoroughly entertained. 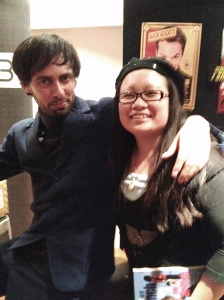 See you next year, Marcel – merci beaucoup for the outstanding show and for the lovely message in your book (and you’re right – it is superb! 😉 )

If you would like to get to know more about Monsieur Lucont, check out his website: www.marcellucont.com.