Written in 1929 by the late Noël Coward, Private Lives explores this particular brand of temperamental, mismatched love.  Elyot and Amanda are happily divorced and five years on they are now honeymooning with their new spouses.  Little do they know that as rotten luck would have it, both couples happen to be doing so in the same hotel right next to each other.  Awkward.

I really enjoyed the first act.  It sets up not only the tone of the play perfectly but through Sibyl and Victor’s incessant questioning, we also learn of Elyot and Amanda’s volatile relationship filled with narcissistic egos and constant bickering which ultimately ended due to alleged infidelity.  A lit line in the middle of the stage marks the two balconies of their adjoining hotel suites and the scene goes back and forth between the couples seamlessly, with their conversation bouncing off each other in an uncanny mirrored symmetry.

Against the stark white backdrop, music forms the heartbeat of the play and the friendly banter between the two new lovers takes a turn when Lou Reed’s dreamy and melancholic Perfect Day starts playing.  When Elyot and Amanda finally set eyes on each other, all hell breaks loose and what unfolds is nothing short of chaotic comedic mayhem.  Although Elyot has an overwhelming “sensation of impending disaster”, this is ignored completely for the irresistible pull they have towards each other and subsequently they run off together, abandoning Sybil and Victor.

Act two sees the couple “living in sin” in Sydney.  Unsurprisingly the reasons as to why they eventually divorced in the first place begin to rear its ugly head again.  Their use of the code word “sollocks” to impose a time out seems to put them at bay for a while but they soon realize that the undeniable chemistry they share which brings them together is also the thing that makes them completely unsuitable for each other.

As the story unfolds, their love-hate relationship unravels; their quarrels increasingly intensify and eventually it all culminates to an explosive crescendo.  This could be seen as repetitive but the ever-present comedy which is sharp, witty and dripping with linguistic irony keeps things fresh and entertaining. 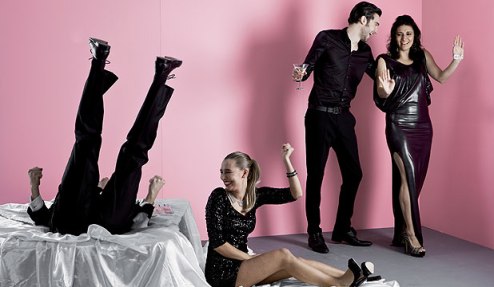 It’s hard to believe Private Lives was penned over eighty years ago as, tweaks aside, it still manages to feel modern and as relevant as though it were written yesterday.  It has been revived many times over the years but with this production in particular, what really brings this play to life are the actors.

Matt Whelan was the star of the show for me.  He plays the superficial and caddish Elyot to perfection, providing a great comedic physicality to the character and delivering a plethora of excellently written and brilliantly timed one-liners with great ease.  Mia Blake’s stage presence is electric and perfectly complements Whelan’s performance as the sexy and sophisticated Amanda.

Fresh off The Pride*, Silo’s previous production, Sam Snedden is a natural fit for Victor, the sensible moral compass of the group and antithesis to Elyot.  He once again showcases his remarkable ability to fully embody any character that he is given.  Finally there’s Sophie Henderson who portrays the young and naïve Sibyl wonderfully, giving Whelan a run for his money delivering some great comedic moments too.

Shane Bosher, who previously directed TRIBES**, triumphs again as director in this production.  He is clearly an actor’s director for he has succeeded in bringing out the best performances in these actors making it an absolute delight to watch.

Private Lives is an exceptionally written story that transcends time and is romantic comedy at its best.  It will have you hooked from start to finish and leave you wanting more.

Private Lives is playing at the fabulous Rangatira at Q until 29 September.  To book tickets, click here.

*Read my review of The Pride here.

**Read my review of TRIBES here.