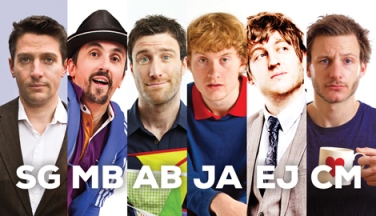 This year’s ensemble comedy night at the Bruce Mason Centre was a “best of the British” affair and boy was it an absolute cracker!

Stuart Goldsmith, the  “dirty – but in a good way” compère was loads of fun and effortlessly kept the audience not only well and truly entertained but in high spirits (and hysterics!) throughout.  His charm and charisma is truly infectious – very disappointed that he is not doing a solo show!

Kicking things off was Welshman Elis James who regaled us with hilarious stories about a drunken couple at a wedding and the time he was a one-song-wonder Christmas caroler.  His seamless ability to tell a bloody good story – which includes amusing re-enactments – coupled with his likeable persona will leave you wanting more.

Up next was the affable Andrew Bird who kept the audience hooked with his animated slice-of-life anecdotes.  His tales ranged from family life involving his “pet human” to dealing with vague cooking measurements (I will never read “knob of butter” the same again!) to my personal favorite – his failed attempt at being not at home at home.

Markus Birdman brought along a slight change in energy with his more edgy style of comedy.  His material is a little on the crass side so is not for everyone but if you are not easily offended, he is an entertaining act.  Talking candidly about sex, relationships and neo-Nazi fashion, he leaves no stone unturned.

After the interval, James Acaster takes to the stage.  He really impressed me at the Comedy Gala so was very keen to see more!  Do not be fooled by the understated demeanor and deadpan style – he is sharp as a tack.  His set is self-indulgent but not in an arrogant way and is incredibly witty and delivered impeccably.

Closing the show is Chris Martin, another favorite of mine from the Gala.  He easily captures and holds the audience’s attention as he relays his jaded perspective of every day things.  His material is deliciously cynical but oddly compelling and easy to relate to.  And most importantly, it’s funny as hell!

Most if not all of these superb acts are performing again at the BMC this coming Saturday (May 4th).  If you are looking to get some laughs this weekend, look no further!  To buy tickets and for more details, click here.

You can also catch them at The Big Show which runs weeks 2 and 3 of the festival – click here for details.